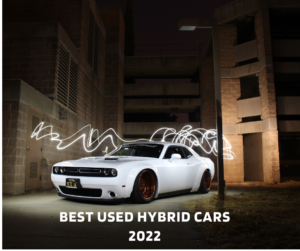 When hybrid cars first hit the road in 2000, they had a limited impact. They were expensive to run, with lower MPG than non-hybrid models. They also suffered from being marketed as eco-friendly when there was much negative press around the environmental impact of gas-guzzling SUVs. With hybrid technology now commonplace across all vehicle manufacturers and several used hybrid models available at affordable prices, the time is ideal for those looking to save money on their car while reducing their carbon footprint and cutting down on maintenance costs. Hybrid cars are an excellent choice for anyone looking to do one or all of those things, so here is our pick of the top 5 best-used hybrid cars for sale in 2022.

The Prius has a great reputation for being an eco-friendly vehicle. This is a wonderful choice if you want to reduce fuel costs without compromising other advantages, like comfort or technology.

This is because the fourth-generation Prius, which debuted in 2015, switched to a new chassis built on Toyota’s New Global Architecture platform. The Prius concentrates on saving gasoline, yet despite this, it has a surprisingly smooth ride and superb body control thanks to a clever suspension setup.

Early vehicles are tax-free due to the 1.8-liter petrol engine, and electric motor combination’s stated sub-100g/km emissions at launch. Toyota Prius (Mk4) is one of the best-used hybrid cars.

If you seek maximal acceleration with the CVT transmission, the engine may drone, contrary to Prius’s laid-back and effective nature. Maintain order, and it’s wonderfully elegant and cozy.

Practicality might be included in the long list of qualities it has. Because the chassis was created with hybrid powertrains, the batteries don’t take up much room in the back, leaving a respectable 343-liter boot. Toyota Prius is one of the best used hybrid cars.

Look for examples with significant mileage. Due to their effectiveness, Priuses have been used as taxis often. The batteries are dependable, but we’d wait for a lower mileage model because it’s more likely to be a privately owned vehicle.

The Ford Fusion Hybrid is a great option if you’re looking for a midsize sedan to fit your eco-aware lifestyle. For around-town driving, the 2.0L four-cylinder with electric motor models from 2017 to 2019 get an EPA-estimated 43 mpg in the city. The 2017–2019 Fusion Hybrid also has an eco-guide, which shows green leaves in the instrument cluster to highlight how your driving is affecting gas mileage to help you reduce your fuel use.

The Ford Fusion Hybrid will have the following items as standard equipment if you choose the Titanium trim:

A midsize sedan with strong acceleration, a cozy interior, and admirable mpg ratings is the Toyota Camry Hybrid. According to the EPA, the 2.5L four-cylinder engine and the electric motor in the 2019–2021 models produce 208 hp and 52 mpg combined.  2021 Camry Hybrid models can accelerate from 0 to 60 mph in about 8 seconds, whether merging onto a highway or passing on a two-lane road. Toyota Camry Hybrid is one of the best-used hybrid cars.

The Toyota Camry Hybrid base trims in 2019–2021 models include the following as standard equipment in addition to 15 cubic feet of cargo space:

The Toyota RAV4 crossover, which is always in demand, has a lot to offer even without its exceptional EPA-estimated 33 mpg (39 mpg starting in 2019).  Together, a continuously variable gearbox and a 2.5L four-cylinder gasoline engine provide 194 horsepower, and all-wheel drive is standard on RAV4 models from 2017 through 2022. Do you want to travel across the countryside with the dog and the kids? The RAV4’s cargo space was designed for exploration. Toyota RAV4 hybrid is one of the best used hybrid cars.

From 2017 through 2022, these features and more are standard. Hybrid Toyota RAV4s:

The Honda Accord Hybrid has amenities and handles well, offering something for everyone. The 2.0L four-cylinder engine and two battery-fed electric motors used in 2018-2020 cars provide 212 horsepower in total system output and an EPA-estimated 47 combined mpg (2018) and 48 combined mpg (2019). Honda Accord hybrid is one of the best-used hybrid cars.

You’ll like how steady and exciting this hybrid feels, with confident handling and powerful acceleration. In addition to 16.7 cubic feet of trunk space in models from 2018 to 2020, basic Honda Accord Hybrid cars come standard with the following features:

VIN stands for Vehicle Identification Number which consists of 17-digits. With the VIN decoder service, you can get detailed information about the car, such as its model, year, manufacturer, accident records, theft records, maintenance records, odometer readings, recalls, title history, and much more.